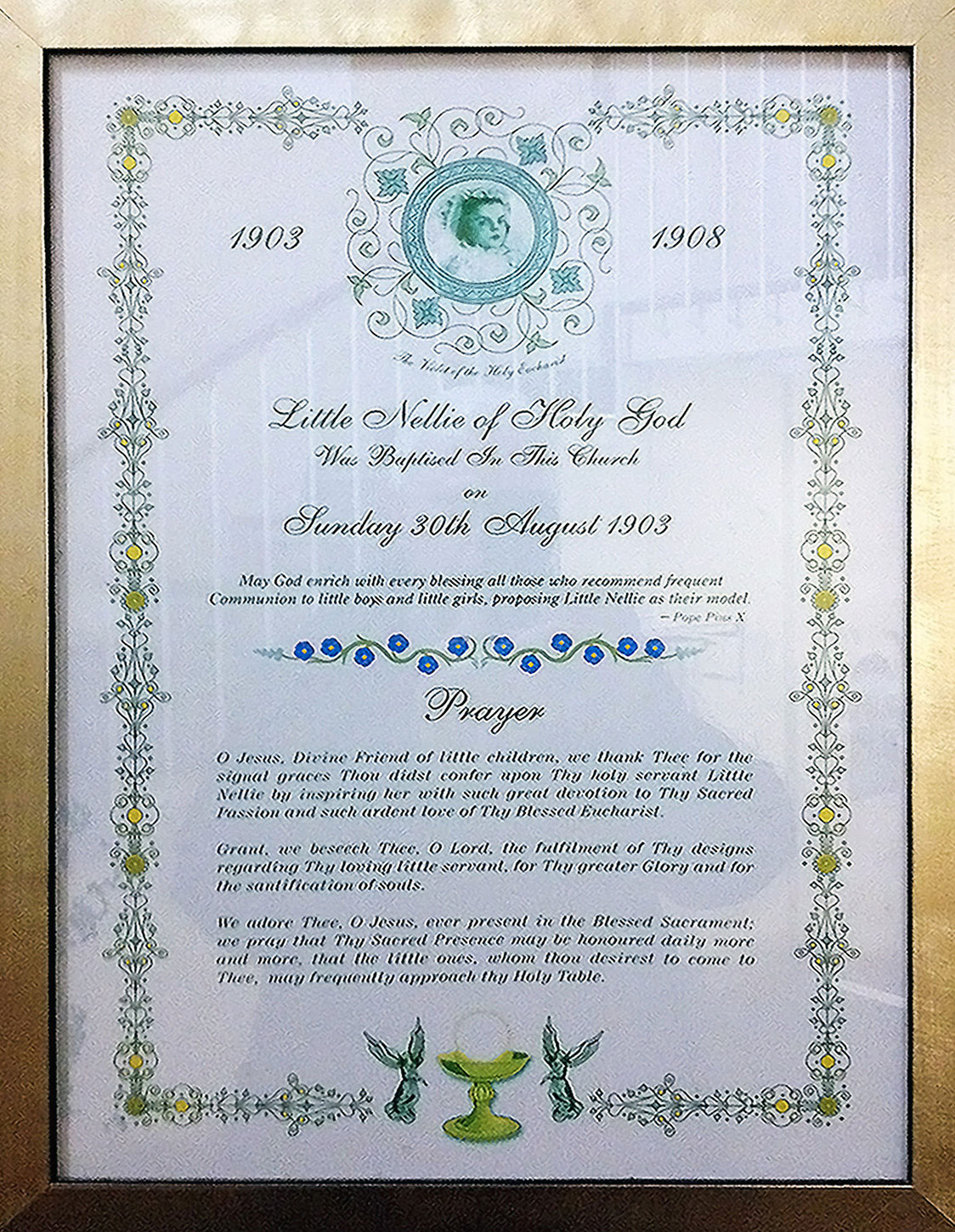 Nellie Organ known as “Little Nellie of Holy God” was born on August 24, 1903, at the Royal Infantry Barracks in Waterford, Ireland. Soon after she was brought to Ballybricken parish Church Waterford of the Most Holy (Trinity Without) where she was baptised on Sunday 30th August 1903. The above pictured plaque is located inside the church entrance to commemorate the Baptism of Little Nellie. The original baptismal font used for the baptism of Little Nellie is still used in the church today. She was the fourth child of William Organ from Dungarvan Co Waterford her mother was Mary Aherne from Portlaw Co Waterford.

Her father, who was in the Royal Artillery, was transferred in 1905 to Spike Island in Cork, after the family moved to Cork the health of little Nellies mother deteriorated and she died from tuberculosis in January, of 1907. Their father found it difficult  to care for his young family, and so they were sent to charitable institutions  Nellie and her sister were  sent to live at the Good Shepherd Sisters Industrial School in Sunday’s Well, Cork.

Over time her health deteriorated, the Doctor said that she was suffering from tuberculosis and would not have long to live. Little Nellie died on February 2nd, 1908.  As she lay dying, she saw something at the foot of her bed.  Her eyes followed something moving, and she seemed to be speaking to someone. Then she smiled and passed away.

Nellie was buried in the public cemetery, but a year later her body was removed and buried in the Cemetery of the Good Shepherd Convent. Her body was then found to be intact, except for a small cavity in the right jaw which had been destroyed by disease.

Pope Pius the Tenth heard of the extraordinary life of Little Nellie and shortly after he changed the age at which children can receive Communion from twelve years to seven years. “Little Nellie of Holy God”, had made an impact on the church despite her short life. Many people visit the grave of Little Nellie every year. There is a great connection between Ballybricken Church Waterford and Little Nellie. 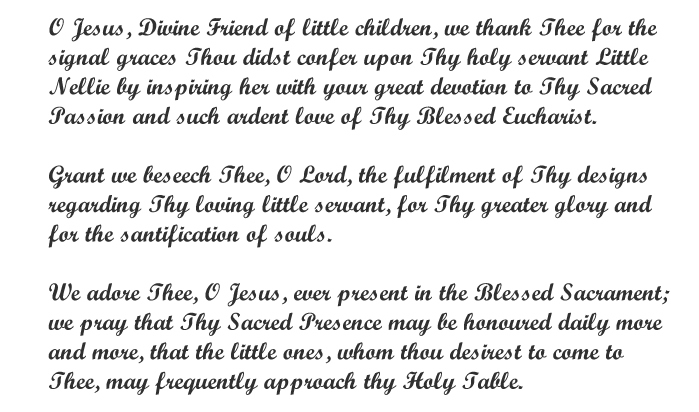 CHURCH OF THE MOST HOLY TRINITY WITHOUT. Welcome to Ballybricken parish in the heart of Waterford, Ireland's oldest city. The parish community welcomes all visitors to our ceremonies and if you come as a stranger we hope you leave as a friend.

We wish to congratulate Fr. Mullins on his Golden Jubilee as a priest which occurs on Sunday 21st June. Best wishes from the Parish in the years to come.

If you need Contact Information for our Parish.
Read More >>

The church History dates back to the first quarter of the nineteenth century.
Read More >>